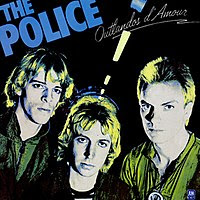 Band: The Police
Album: Outlandos d’Amour
Why Rolling Stone gets it right: The Police's debut album is arguably the band's best, with high-energy songs from the first note to the final one. Despite controversy surrounding the album's two singles, the album was a huge hit and remains a classic.
Why Rolling Stone gets it wrong: Energy doesn't equal great songs, necessarily. The low spots are low and the band sounds as young as it was.
Best song: It's a tough call, as "Roxanne," "Can't Stand Losing You" and "Next to You" are all classics. Personally, I'd go with "So Lonely," the band's earliest messing of reggae and punk rock.
Worst song: "Born in the 50's" isn't great.
Is it awesome?: Absolutely.

From the department of "useless facts about Ross": I think Sting's and my falsetto are within the same range. "Roxanne" is the only song in the unstoppably great video game "Rock Band" which I can consistently get 100% on the vocals. Noel Gallagher's vocal range is similar to mine (limited as that may be), but I've never scored 100% on an Oasis song in the game.

"Outlandos d’Amour" has tons of hooks, for sure. Sting's nasal voice fits the music perfectly, even when he's singing about prostitutes or suicide.

In fact, those two singles -- "Roxanne" and "Can't Stand Losing You" -- earned the band some controversy in England. The lyrics of "Roxanne," of course, go straight to the point, as the words "red light" are all over the song. "Can't Stand Losing You" lays out suicide only once (the final verse: "But you'll be sorry when I'm dead/And all this guilt will be on your head/I guess you'd call it suicide/But I'm too full to swallow my pride"), but the, uh, cover of the single attracted some talk: 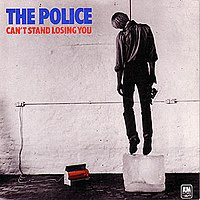 The album isn't just those two singles, though they are both wonderful. "Truth Hits Everybody" has Andy Summers and Stewart Copeland singing perfect backup old-time backup vocals over a punk rock thrash. "Next To You" is a high octane romp with Copeland showing off his considerable chops. "Peanuts" is sporadic, but fun. "Hole in My Life" has the classic reggae tinge, a signature of the band.

"So Lonely" is the highlight of the album. Slightly slow with an awesome reggae beat, the song features some of Sting's best harmonies with Copeland and Summer. It also has a simple lyric inflected with Marley-esque tone, as Sting explained in 2000:

People thrashing out three chords didn't really interest us musically. Reggae was accepted in punk circles and musically more sophisticated, and we could play it, so we veered off in that direction. I mean let's be honest here, 'So Lonely' was unabashedly culled from 'No Woman No Cry' by Bob Marley. Same chorus. What we invented was this thing of going back and forth between thrash punk and reggae. That was the little niche we created for ourselves

The album isn't perfect. "Born in the 50's" is a turd and the spoken word nonsense of "Be My Girl - Sally" is terrible.

Still, the album is the band's best. Full of piss, vinegar and energy, it was a shape of things to come.
Posted by R.J. at 11:09 AM