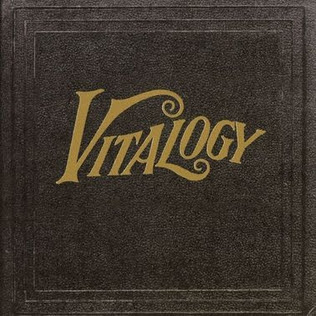 Band: Pearl Jam
Album: Vitalogy
Why Rolling Stone gets it right: Delayed by the band's fight with Ticketmaster, "Vitalogy" was recorded mostly as the band toured the country. Problems within the band created a strange dynamic and some eclectic stuff.
Why Rolling Stone gets it wrong: Pearl Jam is still Pearl Jam. It's not great music.
Best song: "Nothingman" isn't bad.
Worst song: Bah. "Corduroy" stinks.
Is it awesome?: Nope.

(Honestly, is Pearl Jam the only band without its best album on the list? I guess you could argue one of the early Soundgarden records, but I'd still go with "Superunknown." Maybe someone could claim "Chocolate City?" I don't know. "Vs." is the superior of the Pearl Jame records.)

Here's another question: Is Pearl Jame the most misrepresented band of its era? There's a feeling that Pearl Jam had a "grunge" sound, which is nowhere near true. The band's distance from the Seattle sound is large, considering Pearl Jam's entire being is one of anthematic classic rock. Instead of taking influence from the hardcore and punk bands of the '80s -- as Nirvana, Alice in Chains and Soundgarden did -- Pearl Jam took influence from Neil Young and the Who.

Similarly, Vitalogy is Pearl Jam's more "punk" record, though that's a very relative concept. "Spin the Black Circle" is the analog-as-savior song, built on a high octane riff. "Not for You" and "Corduroy" is are classic Pearl Jam songs, all dirge and whine. The band branches off into the eclectic zone on a couple of tracks, trying to be Tom Waits on "Bugs" and a sonic scrap band on "Hey Foxymophandlemama, That's Me." Save for the weirder songs, the album is simply another Pearl Jam record. The songs run together and are entirely forgettable.
Posted by R.J. at 11:05 AM

re: bands represented but not by their best work

imo "Aquemini" & "ATLiens" are bother better than "Stankonia" but are all deserving. on a similar note I think ATCQ's best album is "Midnight Marauders" but that's highly debateable.

^that's full of typos. "bother" should be "both" and it should say "but they are all deserving".

I enjoy Pearl Jam's music, so I'll beg to differ with you on your overall opinion of the band, but you're right on the other points: Vitalogy isn't their best effort (right again on Vs.), and they aren't (and never were) a grunge band. As much as people want to lump them in with Nirvana, their technical guitar chops far outweigh Nirvana's, although clearly Kurt's melodies reign supreme.