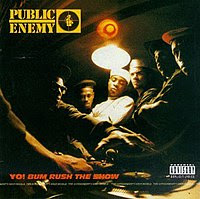 Band: Public Enemy
Album: Yo! Bum Rush the Show
Why Rolling Stone gets it right: Public Enemy's debut is a product of its times. It features some young, angry men practicing hip hop in a great way. It's not as solid as the group's later work, but it remains excellent.
Why Rolling Stone gets it wrong: Again, it's a dated record.
Best song: "Timebomb" is great.
Worst song: "Too Much Posse" is what happens when you give Flavor Flav a mic. This is a bad thing.
Is it awesome?: It's not totally awesome, but it's the precursor to something awesome.

As with almost all debut albums, "Yo! Bum Rush the Show" portends the general sound that Public Enemy would later perfect on albums like "It Takes a Nation of Millions to Hold Us Back" and "Fear of a Black Planet." Chuck D's low rap and the Bomb Squad's production flow through the album.

With that said, the record is also a product of its time and its producer. Rick Rubin executive produced the album, despite actual production from the Bomb Squad. The record echoes LL Cool J's "Radio" in its old school feel. With all that said, the Bomb Squad's attachment to the samples and scratches of Terminator X. Some of the record sounds old, there's no way around it. "Public Enemy No. 1" is ridiculous and "Miuzi Weighs a Ton" is to gangsta rap as cro-magnon man is to a modern human.

Here's the other thing, Flavor Flav's prescence on the record is a little grating. "Too Much Posse" is a Flav track and he's awkward and stupid, rhyming "cool" with "fool" at one point. Flavor Flav is, in and of himself, a total joke. The hype man is one of the worst inventions in popular music. The Dickipedia entry on him sheds light on the silliness within, so I'll just link to it.

Again, I look to PE as the group many liberal boomers see as the extension of black people they knew from the 60s and 70s: The Panthers. They're mad, but they're old now, so they're harmless.
Posted by R.J. at 9:00 AM

stay cool, fool
they ain't gonna roll up
all they want is f*ckin' donuts