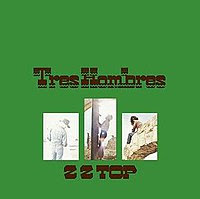 Band: ZZ Top
Album: Tres Hombres
Why Rolling Stone gets it right: Before they were the guys with the crazy car, ZZ Top played hard blues riffs over and over. "Tres Hombres" is an album of hard blues riffs, played over and over.
Why Rolling Stone gets it wrong: There's not a lot to hate here. It's ot one of the best 500 albums of all time, but at 498, is anyone really complaining?
Best song: "La Grange," a song about a whorehouse, is a classic. "Waitin' For The Bus" is pretty good.
Worst song: Once you get to "Have You Heard?" you're pretty tired of the same three riffs.
Is it awesome?: Nah.

Before ZZ Top was the ZZ Top we all know, the band was simply a three-piece from Houston. Playing inexplicably simple blues-rock, the band released "Tres Hombres" in 1975, to minor fanfare.

The album is actually quite pleasant for what it is. It's blues rock as filtered through a solo-happy guitarist and a rhytymn section happy to fall into the background. So, you have songs like "La Grange," a three and a half minute guitar solo, with some stolen John Lee Hoker riffs in between.

That's not to say "La Grange" is a bad song. It's not. It's tons of fun and that song's opening -- lifted or not -- is iconic in rock and roll music. You know it the minute you hear it.

"Jesus Just Left Chicago" is a similar blues song, in that the riff is lifted and the lyrics are thematically typical of the genre. "Waitin' For The Bus" isn't bad and "Beer Drinkers and Hell Raisers" has a decent populist streak (though I still dislike blue collar rock).

It's not the worst thing in the world, but it's pretty standard blues
Posted by R.J. at 10:47 AM

Oh man, what about the inside of the record? (mexican feast.) Found this one at a garage sale, and remain naive to the band's contextual history , but have to say I've listened to Jesus Just Left Chicago a thousand or so times.