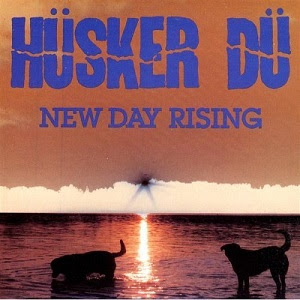 Band: Hüsker Dü
Album: New Day Rising
Why Rolling Stone gets it right: One of the preeminent 1980s underground bands, Hüsker Dü was fast and furious before that term had soemthing to do with cars. Bringing pop melodies to hardcore speeds and muscianship to the Minutemen's ethos, "New Day Rising" is a classic.
Why Rolling Stone gets it wrong: I'd suggest "Zen Arcade" is better, but I'm generally happy with this placement.
Best song: "Terms of Psychic Warfare" has a great guitar solo, the title track is awesome and "Celebrated Summer" shows the band's ability to branch out.
Worst song: I don't love "Whatcha Drinkin'".
Is it awesome?: Sure.

I am a liar. Earlier this week, I said Pearl Jam was the only band on this list without its best album on the list. Hüsker Dü also holds that distinction with "New Day Rising" here at 495 and "Zen Arcade" not on the list.

Hüsker Dü's influence is grand and "New Day Rising" backs up the band's reputation. The band was part of a wonderful blooming trio of bands in the 1980s out of Minneapolis/St. Paul including the Replacements and Soul Asylum (before they started to suck). Hüsker Dü was the hardest of the bands, starting as a hardcore band, all screams and distortion. As the band matured, vocals became more sing-songy and the guitars became more melodic, all while keeping the general aesthetic.

"New Day Rising" hitches up where "Zen Arcade" left off. The album's works themes like ambivalence and lost love are wonderful and tender. Bob Mould's voice is never better than on "Perfect Example" and Grant Hart's sadness is palpable on "The Girl Who Lives on Heaven Hill."

Of course, the bass lines roll ("Terms of Psychic Warfare") and the buzzsaw guitars on the title track show off the band's hardcore roots. Melody is wonderful, but thrashing is also awesome.
Posted by R.J. at 10:19 AM

"Zen Arcade" absolutely crushes this album. then again "Zen Arcade" crushes about 95% of guitar band albums ever recorded. i'm just happy to see Husker Du get a little recognition. now if only they'd seen fit to find a place for Mission of Burma...